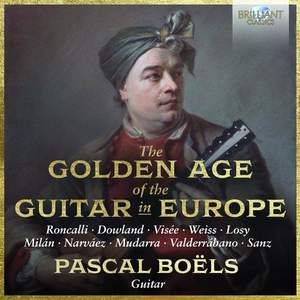 The Golden Age of the Guitar in Europe

VII. Menuet I and II

Losy: Partita in A minor

This fascinating program focuses on the two most important eras for the guitar: Spain and the European Baroque.

In Spain lays the origin of the guitar, where the vihuela - another guitar of the Golden Age, already equipped with six rows of strings - was to produce an immense corpus of great quality, often inspired by the Flemish polyphonists and plainchant. Many vihuelists considered their instrument as a perfection, "more perfect than the harp and the keyboard and also more difficult" and suggested it could exorcise evil spirits, thus giving it a transcendent quality much like the lyre of Orpheus or the zither from the Psalms of David. Presented here are works by De Narvaez, Mudarra, Milan, Sanz and Valderrabano.

The other era presented here is the rich European guitar heritage with works by Roncalli, De Visée, Dowland, Weiss and Losy.

Played by Pascal Boëls, who is regarded as one of the best current specialists of the ten-string guitar, with the extension of the bass notes which permits an exact fidelity to the musical text.