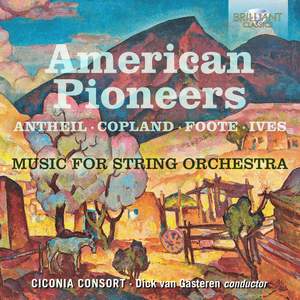 The CD ‘American Pioneers’ is recorded in 2020 by the Dutch Ciconia Consort to commemorate the historical landmark that 400 years ago the Pilgrim Fathers left the Netherlands for America, The influence of the Founding Fathers of the United States is substantial, reaching far into the most recent history.

The pioneering theme is reflected in Ciconia Consort’s choice of composers and their music. Arthur Foote was one of the first group of significant classical composers in the new country. However, his work still mainly sounds 'European' and seems a continuation of the traditional style of Brahms and Schumann. Aaron Copland has been a pioneer in creating a true 'American sound' like no other. His ballet Appalachian Spring tells the story of a pioneer family in the countryside of America. George Antheil was a pioneer and rebel in his whole being, always looking for new inventions (also outside of music). And Charles Ives has been considered as an avant-garde composer, who in his proper and original way, has aimed to express the American spirit and traditional folk music in his work.

This recording is the second CD on Brilliant Classics of the Ciconia Consort, a Dutch string orchestra conducted by Dick van Gasteren, an internationally active conductor, who was Bernard Haitink’s assistant during the Mahler Festival Amsterdam in 1995. Their first CD for Brilliant Classics contained French music for string orchestra, and was met with enthusiastic critical acclaim.