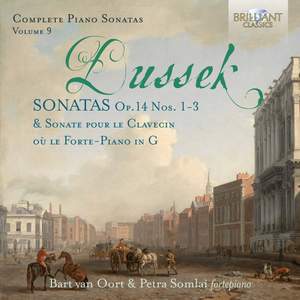 The continuation of an exciting new project: the recording of the complete piano sonatas by Dussek! Johann Ladislaus Dussek (1760-1812) was born in rural Bohemia. He led a restless life, travelling Europe as a keyboard virtuoso and settling in several European capitals, notably Paris and London, where he became a fashionable pianist and teacher. Dussek’s style is rich, harmonically expressive and pianistically challenging, Classicism on the brink of Early Romanticism.

This new recording contains the three sonatas Opus 14, written and published in London in 1791, when Dussek’s popularity in the British capital was increasing rapidly.

Played by Bart van Oort, fortepiano veteran and originator of this Dussek project, and Petra Somlai, a young Hungarian fortepianist who graduated from the The Hague Conservatory