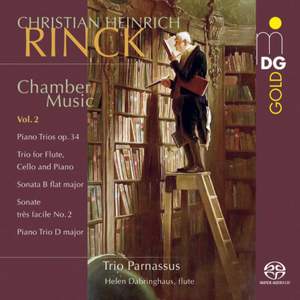 Rinck’s equally slight but charming works may be no lost masterpieces but their craftsmanship, graceful lyricism, often catchy themes, economic means and unassuming character are easy on the... — Gramophone Magazine, March 2021 More…

The Trio Parnassus already caused a sensation with the world premiere recording of Vol. 1 of the chamber music works of Johann Christian Heinrich Rinck, who celebrates his 250th birthday this year. Since its beginnings, the Trio Parnassus has dedicated itself to long forgotten music. Rinck prefers the smaller form, some of the piano trios even consist of only one or two movements. An exception is the large Trio in D major, which already claims a higher standard with the slow introduction. Even though Rinck is of the same age as the currently omnipresent Beethoven, the music could not be more different: rococo lightness meets romantic sentiment, there is no trace of brooding Sturm und Drang. But what the four musicians make of it is far more than fine entertainment and makes listening to this Super Audio CD, which is also sophisticated in terms of sound technology, a pure pleasure.

Rinck’s equally slight but charming works may be no lost masterpieces but their craftsmanship, graceful lyricism, often catchy themes, economic means and unassuming character are easy on the ear, reminiscent at various times of Haydn, Mozart, Hummel and Mendelssohn...Helen Dabringhaus, like her colleagues, plays with a smile, ensuring that what could easily become flat-footed and earnest is mischievous, piquant and engaging.