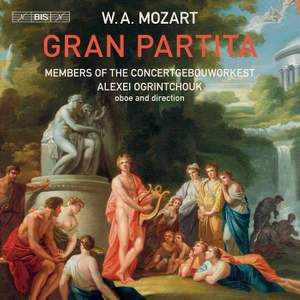 Ogrintchouk, directing members of the Royal Concertgebouw Orchestra from the oboe, delivers a compelling performance that almost rivals the benchmark recording from the Berlin Philharmonic Wind... — BBC Music Magazine, March 2021, 4 out of 5 stars (Performance) / 5 out of 5 stars (Recording) More…

Better known as Gran Partita, Mozart’s Serenade in B-flat major, K 361 is the crowning glory of the Harmoniemusik of the Classical era. Austrian and German nobles in particular often employed small wind ensembles called Harmonien which provided entertainment during banquets and outdoor festivities. In order to satisfy the growing demand for suitable music, countless arrangements of operas and ballet music were made, while original works were supplied by a wide range of composers – Haydn, Beethoven, Schubert and many lesser masters wrote Harmoniemusik. Among their works, Mozart’s Serenade stands out for several reasons. It is on a larger scale than most: with seven movements and a duration of some 50 minutes, it is scored for thirteen instruments rather than the usual eight or nine. But conceived with a cyclical layout and with a highly economic use of motivic material, it also displays a compositional sophistication unusual for the genre. The Gran Partita is here performed by wind players from one of the world’s finest orchestras, the Amsterdam Concertgebouworkest, under the direction of oboist Alexei Ogrintchouk. Ogrintchouk has also chosen the coupling, a set of variations by Beethoven on Mozart’s famous aria from Don Giovanni scored for two oboes and English horn.

Ogrintchouk, directing members of the Royal Concertgebouw Orchestra from the oboe, delivers a compelling performance that almost rivals the benchmark recording from the Berlin Philharmonic Wind Ensemble on Warner Classics...BIS’s recording is so spectacularly vivid that you can hear the collective intake of breath that precedes the opening chord.

As in all the best performances, the wind players of the Concertgebouw (the brand speaks for itself) combine refinement of blend and ensemble with a sense of spontaneous enjoyment...When they choose, the Concertgebouw players are as mellifluous as you could wish. But they’re not afraid of a touch of abrasiveness...this superlatively played new recording immediately joins the shortlist for this most sumptuous of serenades.

Ogrintchouk, the Royal Concertgebouw’s oboist, takes the lead here in a performance full of operatic vivacity and capturing the aria-like cantabile in the sublime Amadeus Adagio and the Romanza. The Beethoven variations — two oboes and cor anglais — on Mozart’s love duet from Don Giovanni are a rare delight.