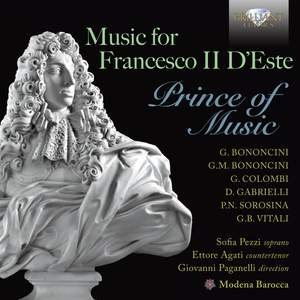 Francesco II d’Este ruled over his duchy from 1674 to 1694, two decades that proved to be of exceptional importance for the history of music in Modena.

The duke’s profound interest in music gave rise to a major upsurge in composition, performance and conservation. Indeed, his constant support for all things musical was captured by the historian Ludovico Antonio Muratori, who described the prince of d’Este as “extraordinarily handsome, with a charming combination of sweetness and majesty”.

Francesco surrounded himself with musicians of quality, keeping abreast of all the musical styles, genres and tastes of the time. Exceptional composers, singers and instrumentalists headed for Modena, and some of them, such as Giovanni Battista Vitali (1632-1692) or Domenico Gabrielli (1659-1690), moved there permanently.

This new recording presents music by Bononcini, Gabrielli, Colombi, Sorosina, Vitali, in instrumental and vocal music, especially secular Cantatas. • Beautifully performed by Sofia Pezzi (soprano), Ettore Agati (counter- tenor) and the instrumental ensemble Modena Barocca, whose mission it is to discover and present the musical treasures of its city.