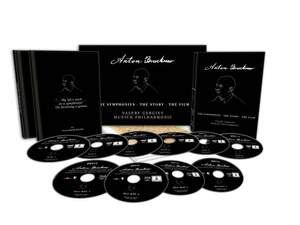 Offer, Anton Bruckner: The Symphonies, The Story, The Film

Arthaus has afforded Gergiev’s erratic Bruckner every chance of success. His performances make better sense on camera, filmed with a care for the patient architecture of the symphonies as well... — Gramophone Magazine, March 2021 More…

The Munich Philharmonic and Valery Gergiev present the most spectacular and ambitious cycle of Bruckner’s Symphonies. All the performances took place in the Monastery of St Florian in Linz, a venue inextricably linked to the composer and his final resting place.

Including new filmed documentary „Anton Bruckner – The Making of a Giant“ directed by Reiner E. Moritz.

„Anton Bruckner – The Making of a Giant“ is the first in-depth documentary about a composer who was long time underestimated by his contemporaries and only found recognition after his death. In the meantime, the Upper Austrian composer has become one of the most pioneering composers who significantly ANTON BRUCKNER THE SYMPHONIES • THE • the most spectacular and ambitious cycle of the composer’s symphonies for the first time on 6 DVDs as well as 4 Blu-rays • all symphonies are performed by the Munich Philharmonic and Valery Gergiev • an unique luxury edition with many features • including Anton Bruckner’s handwritten CV as Facsimile • Hardcover book “Anton Bruckner - On Becoming a Genius” in different languages • brand new documentary “Anton Bruckner - The Making of a Giant” • Organ Improvisation on themes of Bruckner’s Symphony No. 2 performed by Martin Haselböck influenced the history of music until the 20th century. Director Reiner E. Moritz searches for traces on the most important places in Bruckner’s life and deals with both the symphonic work and the outstanding organ works. Through the use of interviews with scientists, organists and conductors he retraces the life of Bruckner who was a genius of tones.

Arthaus has afforded Gergiev’s erratic Bruckner every chance of success. His performances make better sense on camera, filmed with a care for the patient architecture of the symphonies as well as the Abbey. Timpani and string basses snap into focus when seen and not just heard as if through a curtain...The set’s real asset is On Becoming a Genius, a little book by Elisabeth Maier.