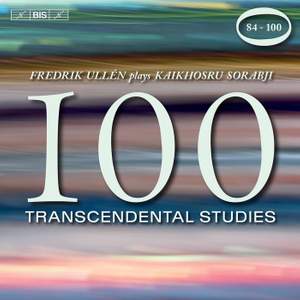 Fredrik Ullén’s accomplishment in recording these works cannot be overestimated. It is a marathon achievement, and he conveys the Studies on this installment with absolute aplomb and with a great... — Fanfare, September/October 2021 More…

By far the largest collection of concert études in the known repertoire, Kaikhosru Sorabji’s set of 100 Transcendental Studies, composed between 1940 and 1944, has a total duration of more than eight hours. On five previous recordings, the Swedish pianist (and neuroscientist) Fredrik Ullén has introduced the first 83 études to a wider audience, the large majority of them appearing on disc for the first time. Now, 15 years after the release of the first volume comes the final instalment, a 2-disc set with the last 17 studies. In his own liner notes, Ullén describes the experience of learning and recording the collection: ‘From the F sharp minor of Study 1 to the F sharp minor chord concluding Study 100: traversing Sorabji’s Transcendental Studies has been somewhat like joining a comet following a long eccentric orbit through pianistic outer space, and finally returning back to mother earth.’ Most of the studies are typical concert études in the sense that they essentially explore a single technical or structural idea. But especially towards the end of the cycle Sorabji includes pieces that are on a much larger scale, a tendency that culminates with the two final études. Besides the programme notes by Fredrik Ullén, the CD booklet includes texts by Kenneth Derus and Alistair Hinton who both knew the composer.

Fredrik Ullén’s accomplishment in recording these works cannot be overestimated. It is a marathon achievement, and he conveys the Studies on this installment with absolute aplomb and with a great deal of musical sensitivity. BIS’s recording quality is top-notch as always.

No complaints about Ullén’s technique: he has to contend with a ‘Coda-Finale’ that is just under an hour in duration and includes a quintuple fugue. He also projects the character of each piece: a terrific ‘Tango habanera’, a scintillating ‘Chopsticks’ and a freewheeling fantasia on Bach’s Chromatic Fantasy contrast with oases of extreme beauty (No 96). Caught in fine sound, this is unhesitatingly recommended to the brave.