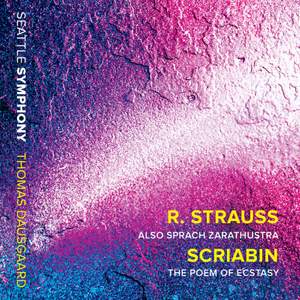 Both [works] need this wide soundscape and the art that conceals art for the details in a clear, broad picture. We still get the timbres of woodwind and harps adding their splashes of colour;... — BBC Music Magazine, February 2021, 5 out of 5 stars More…

Thomas Dausgaard and the Seattle Symphony release thought-provoking live performances of two extraordinary orchestral works composed near the turn of the 20th century: Richard Strauss’ Also sprach Zarathustra and Alexander Scriabin’s The Poem of Ecstasy. Recorded in the stunning acoustics of Benaroya Hall, these bold, colorful scores celebrate the search for creative meaning and the triumph of the human spirit. With naturalistic imaging, depth of field and dynamic range, all Seattle Symphony Media recordings have been engineered to audiophile standards and aim to capture as realistically as possible the sound of the orchestra performing on the Benaroya Hall stage. Digital content will be available on stereo, 96k 24-bit high resolution and 5.1 surround sound.

Both [works] need this wide soundscape and the art that conceals art for the details in a clear, broad picture. We still get the timbres of woodwind and harps adding their splashes of colour; from shrieking piccolo to silky bass lines, as quiet as the grave in Strauss’s first fugue, the dynamic range is impressive...I’d thought of Dausgaard as a febrile kind of conductor, but he knows when to go slow and spacious here, when to drive to thrilling climaxes.

In every aspect Dausgaard, the orchestra, and the engineers have made this new Zarathustra triumphant, however, and unless you need the overpowering slam of Chicago or Berlin, I’d put it in the top tier of recommended recordings. You find yourself listening closely to a piece that can easily slide past as a routine spectacular, so to speak.