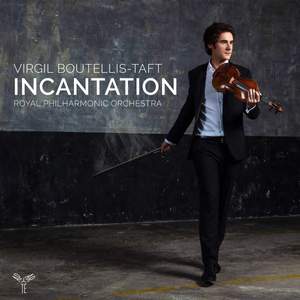 'Incantation' holds many mysteries. The brilliant violinist Virgil Boutellis-Taft strips away the veil of its secret powers, the ones that lie inside his violin's fascinating chant. Sometimes violent and fiery, as in Saint-Saëns' 'Danse macabre', sometimes tender, as in Tchaikovsky and Bruch, 'Incantation' is indeed deeply rooted in musical history, from the Baroque era, with Vitali's 'Chaconne', to the 'Yumeji's Theme', part of the soundtrack of the film 'In the Mood for Love'. Over and over, it kept inspiring many composers their most captivating works. Virgil Boutellis-Taft and the Royal Philharmonic Orchestra, under Jac Van Steen's direction, show remarkable eloquence in this magical recording. One can only fall under these spells.