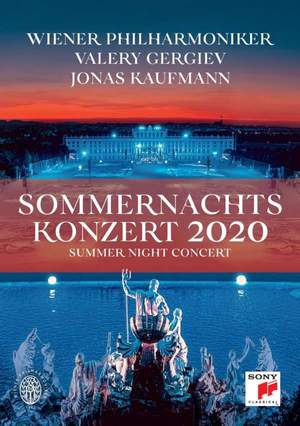 The world’s biggest annual classical open-air concert, The Summer Night Concert of the Vienna Philharmonic, returns to the magical setting of Schönbrunn Palace Baroque park in Vienna. The theme for this year is Love and includes musical favourites from Strauss’s ‘Der Rosenkavalier’, Wagner’s ‘Tristan und Isolde’, Mendelssohn’s ‘A Midsummer Night’s Dream’, the premiere of Maurice Jarre’s ‘Suite Doctor Zhivago’ and many more. Valery Gergiev returns to conduct his fourth Summer Night concert (2007, 2011 and 2018). He will be joined by star tenor Jonas Kaufmann, who is appearing for the very first time. Kaufmann has been performing with the orchestra to great acclaim for the last two decades and has also recorded his Wien album with the Vienna Philharmonic. Kaufmann will sing arias of Emmerich Kálmán’s operetta Gräfin Mariza (Countess Maritza), Puccini’s Nessun Dorma and Massenet’s “Pourquoi me réveiller?”. The concert is broadcast on TV and radio in more than 60 countries, and thus reaches an audience of millions. Specialist promo & marketing activity.