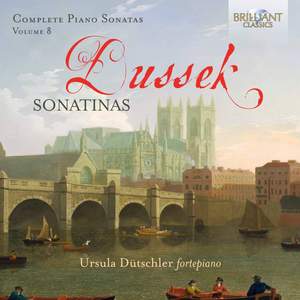 No. 2 in F Major: Andante sostenuto

No. 3 in C Major: Rondeau a la turque: Molto allegro

No. 4 in F Major: Molto allegro

No. 7 in B-Flat Major: Allegro vivace

Comparatively few listeners even today know how much Dussek did toward developing the technical resources of the piano. The contemporary of Mozart, and a great pianist in his own right, he composed more than fifty Sonatas, twelve Concertos and many smaller pieces responding to the tastes of his audiences and publishers for smaller and lighter pieces such as variations on popular themes.

The Sonatinas gathered here were composed primarily for instruction: simple and conventional in style, smaller in technical and emotional range, as well as shorter in length than his sonatas. Yet Dussek was a great melodist and, even when trivial, he never ceases to be graceful and pleasing. Dussek was resident in London throughout the 1790s and published there a good proportion of his prophetically Romantic sonatas and shorter pieces such as these sonatinas, which appeared in print in 1793 (Op.20) and 1794 (Op.34).

Each Sonatina in the Op.20 set – also known as Op.19 – falls into a pair of short but distinct movements: a fairly quick, always sunny Allegro followed by a slightly slower Rondo. This is not the place for the keyboard fireworks of his later sonatas. Dussek was catering for the musical preferences of London middle-class amateurs, who hankered after a Romantic spotlighting of melody within the thinner, clearer lines of the Classical keyboard idiom. The 'song without words' texture can be traced in a direct line from Dussek through to Mendelssohn and beyond.

Lady Montague the same ‘Harriet Montague’ as the courtesan painted by John Raphael Smith in 1777, now elevated in status?). Thus the sonatinas develop from easier to more difficult, and towards the end hardly suitable for amateurs at all. Musically they cover a large spectrum: rondo, sonata form, variations and dances. All the while, they develop from light works into pieces of a more complex structure as well as harmony.

This is Ursula Dütschler’s first contribution to the ambitious ongoing Dussek series on Brilliant Classics, having recorded several of Haydn’s sonatas for a previous survey. She was also a participant in the groundbreaking recordings of the complete Beethoven piano sonatas on period instruments by Malcolm Bilson and six of his former students.

Czech composer Jan Ladislaw Dussek (1760-1812) was a pupil of Carl Philipp Emanuel Bach, and became one of the first piano virtuosos, traveling and concertising in many European countries. During his 10-year stay in London he developed with the manufacturer Broadwood the first 6-foot piano, extending its technical possibilities to a great extent.

Dussek’s piano works, rooted in CPE Bach’s Sturm und Drang style, look forward to the Romantic era, in its use of Affetti, dramatic contrasts and gestures and an unheard-of virtuosity.

Dussek wrote extensively for the emerging middle-class. Every young lady of good origin learned to sing and play an instrument, usually the piano. The Sonatinas and the “12 Progressive Lessons” on this new recording afforded perfect material for the aspiring amateurs: of average difficulty is provided plenty of good tunes and a representative display of (modest..) skills.

Played with winning spontaneity and warmth by Ursula Dütschler, a specialist of the fortepiano.