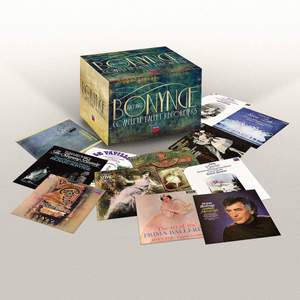 Fans of the conductor, and ballet, are in for a treat. A 45-disc collection, beautifully packaged and featuring original sleeve artwork, Decca has pulled out all the stops, creating a veritable... — BBC Music Magazine, Christmas 2020 More…

Auber: Cello Concerto No. 1 in A minor

Leoni, F: The Prayer and the Sword

Massenet: Fantaisie for Cello and Orchestra

Celebrating Richard Bonynge’s 90th birthday (29th September) and his incredible ballet legacy on Decca, with a brand new edition that reads like an A-Z of the genre

The release of this edition, coincides with a new book entitled ‘Chalet Monet – Inside the home of Dame Joan Sutherland & Richard Bonynge’ to be released worldwide this September

Includes familiar scores by Tchaikovsky & Delibes alongside works revived by Maestro Bonynge throughout his career including works by Adam, Massenet, Minkus, Burgmüller, Auber and Offenbach PLUS rare ballet music and dance sequences from the world of opera, including Donizetti, Gounod, Rossini, Saint-Saens, Verdi and Berlioz, as well as the first release on CD of the overture to Die Fledermaus from Bonynge’s recording of ballet music arrangements of Johann Strauss

Includes all Bonynge’s ‘ballet recital’ records, of which particular highlights include the ‘Méditation’ from Thaïs with the young Nigel Kennedy as solo violinist, and the Art of the Prima Ballerina anthology which was conceived by Bonynge and one of the reigning prima ballerinas of the 20th century, Dame Alice Markova

Included by way of bonus are his recordings of cello concertos by composers otherwise known for their ballet scores (Massenet, Auber, Popper), and Bonynge’s vibrant recordings of Overtures and Entr’actes, as well as ‘opera-ballets’ from Faust, Il trovatore, Alcina and La favorita, which have only previously appeared as part of the complete opera sets.

Fans of the conductor, and ballet, are in for a treat. A 45-disc collection, beautifully packaged and featuring original sleeve artwork, Decca has pulled out all the stops, creating a veritable encyclopaedia of ballet recordings.