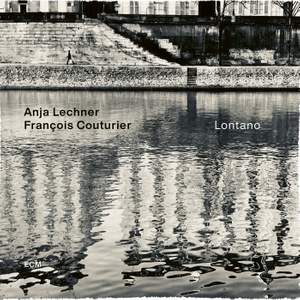 The collection actively explores the titular notion of lontano – or ‘afar’ – by examining music emanating from beyond the Western classical canon, as well as Bach and Henri Dutilleux’s ‘Prelude... — Jazzwise, December 2020, 3 out of 5 stars More…

After their highly acclaimed 2014 debut album as a duo, Moderato canta- bile, Anja Lechner and Francois Couturier widen the scope of music even further.

Since the start of their duo collaboration in the early 2000’s as members of the Tarkovsky Quartet, the duo have been inventing a music that is genuinely impossible to pin down. The duo sings in a voice of its own, be it with original compositions, free improvisations, drawing upon a Bach cantata or an Argen- tine folk lament or subtle inclusion of works by Henri Dutilleux, Giya Kancheli or Anouar Brahem.

“There is no old or new music. It’s there in the air, everywhere, all the time,” in- sists Anja Lechner, echoing Ukrainian composer Valentin Silvestrov, with whom she has worked closely for many years. Having internalised influences and rep- ertoire the German cellist and the French pianist not only locate atmospheric and expressive connections among far-flung sources, but also create new mu- sic that reflects and refracts its inspirations.

On this new recording, the chance shape of a phrase suddenly brings Debussy, Paul Bley or Ligeti to the pianist’s fingers, while in the deep lyricism of the cello’s song there is a borrowed Schubertian inflection, a memory of a Bartok quartet or sonorities that evoke Jordi Savall’s viola da gamba.

The result is a beautifully crafted meeting of musical minds with a tangible thread of shared performance skills. The music is relaxing, challenging and opens up your mind (and ears!) to a new concept in performance.

The collection actively explores the titular notion of lontano – or ‘afar’ – by examining music emanating from beyond the Western classical canon, as well as Bach and Henri Dutilleux’s ‘Prelude en berceuse’. The sound is both spare and sumptuous, pensive and coolly atmospheric.