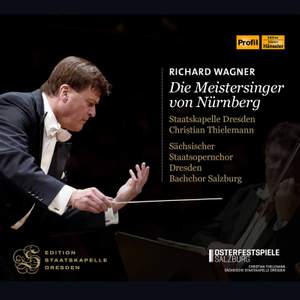 Am stillen Herd in Winterszeit (Live)

"I see Die Meistersinger as the pivot and central point of Wagner’s entire oeuvre. On the one hand it is a reaction to Tristan; on the other, he had found himself in a blind alley with Siegfried, and together those two works showed him the way out of it. The fascinating thing about Die Meistersinger is that you can find everything in it. Hero and anti-hero, comedy and tragedy, upper-class and lower-class lovers, burlesque and reflection, the old and the new, in short a whole world.” The libretto was finished in January 1862, and he finally completed the score in October 1867. Ultimately, Die Meistersinger is not only the satyr play to go with Tristan, but also desensitises it. We might almost say that after the most intoxicating chromatic narcosis in music history, Wagner provides the right smelling salts to counteract it. Die Meistersinger von Nürnberg had its première in Munich on 21 June 1868. Wagner sat in state beside Ludwig in the royal box of the National Theatre, and was enthusiastically acclaimed.” Christian Thielemann The recordings had been done during the Osterfestspiele in the Grosses Festspielhaus of Salzburg in April 2019"

Thielemann inspires a fine standard of musicianship and overall commitment in the orchestra, principals and chorus...Leading the cast is Georg Zeppenfeld’s eloquently phrased, truly menschlich Sachs...Sachs’s gentleness and relaxed nature are evident, but the portrayal also conveys the necessary gravitas...Kohlhepp’s irresistible, gleaming-voiced David [is] most certainly one of the finest performances of this rewarding role on disc.