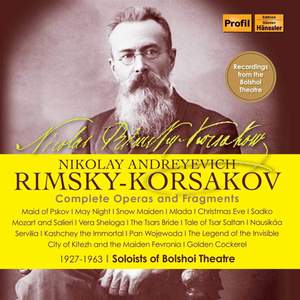 Soloists of the Bolshoi Theatre

Rimsky Korsakov: The Maid of Pskov

"Nikolai Andreyevich Rimsky-Korsakov was born on March 18, according to the Gregorian calendar (Juli an: March 6) 1844 in Tikhvin, in the Russian district of Novgorod. In Saint Petersburg, then capital city of the Russian empire, he made the acquaintance of the composer Mily Balakirev ( 1837-1910), who recognised the boy's talent immediately and encouraged him to compose music. -Together with Modest Mussorgsky (1839-1881), Cesar Cui (1835-1918) and Alexander Boro­din ( 1833-1887) they joined the ""Mighty Handful"", as a critic had dubbed the group of five composers . They pursued ideas of a uniquely Russian music tradition, free of any degenerate ""western"" influences and unspoilt by any academic input. Even so Rimsky-Korsakov Iater on became one of the most gifted orchestrators in the history of music as well as writing a text book that is to this day regarded as a standard reference work. When composing opera, Rimsky-Korsakov would often seek inspiration in fairy tales, and in many cases, like Richard Wagner, he would write the librettos himself. He died after a short llness on June 21 (June 8 in the Julian calendar) 1908 at his Lyubensk estate, in the St Petersburg district. This series brings together for the first time Rimsky-Korsakov's entire operatic oeuvre, ncluding the fragments, all in authentic performances featuring singers from the Golden Age of the Bolshoi Theatre. Some of them can be heard here on CD for the very first time."