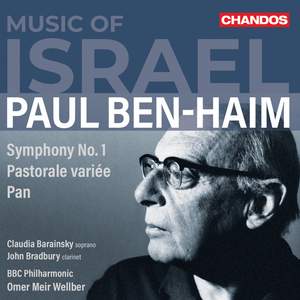 Despite obvious differences in emphasis throughout the programme, the composer’s armoury remains remarkably consistent, not least in demonstrating his superb feeling for instrumental colour...The... — BBC Music Magazine, January 2021, 5 out of 5 stars More…

Paul Frankenburger (born in Munich on 5 July 1897) was a successful conductor and composer in Bavaria, until he lost his position at the Augsburg Opera owing to a financial crisis at the opera house. In 1933, he left Germany and immigrated to Mandatory Palestine. Immediately upon arriving in the new country, he changed his name to Paul Ben-Haim, and within a few years he had established himself as a cultural icon, a highly esteemed and influential composer, and the founder of a new musical tradition. Some consider Ben-Haim the national composer of the young state established in 1948, fifteen years after his immigration. The compositions on this album are closely linked to those dramatic years, during which he changed homelands, swapped identities, and, to a large degree, even replaced, or forged, his own unique personal style. mer Meir Wellber, the new Chief Conductor of the BBC Philharmonic, makes his Chandos debut with this first album in a series devoted to exploring the music of Israel.

Despite obvious differences in emphasis throughout the programme, the composer’s armoury remains remarkably consistent, not least in demonstrating his superb feeling for instrumental colour...The First Symphony is the most substantial work here...[the Presto finale] performed with mesmerising urgency by Wellber and the BBC Philharmonic...In total contrast, the central slow movement is more lyrical and impassioned, an oasis of relative calm which inspires some tremendously eloquent playing.

Ben-Haim’s First Symphony is an astonishingly fine work, structurally coherent in three movements, gorgeously orchestrated, accessible, and sounding considerably like Hindemith in its memorable tightness of expression and controlled energy. It blossoms tonally in places in an almost cinematic way and transcends Hindemith’s style in conveying a touch of Middle Eastern exoticism along the way.

It’s good to see the music of the Munich-born Israeli composer Paul Ben-Haim receiving increasing attention from record companies...It’s difficult to imagine the work [Pan] receiving a more sympathetic and impassioned performance than this one by Claudia Barainsky and Omer Meir Wellber...Altogether, a very worthwhile and rewarding release.