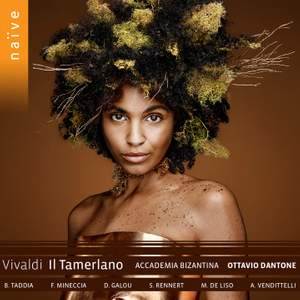 It is impossible to be certain how much of Il Tamerlano was actually composed by Antonio Vivaldi...And yet this musical collage sounds unmistakeably Vivaldian...If the countertenor Filippo Mineccia’s... — BBC Music Magazine, Christmas 2020, 4 out of 5 stars More…

Thanks to this tenth recording by Accademia Bizantina in the central core of the Vivaldi Edition, Il Tamerlano can now take its justly earned place in the Vivaldi catalogue, helping to renew the name and reputation of Timur, the Tartar emperor whose memory was later overshadowed by the Ottoman sultan.

Vivaldi’s opera was first performed during the Venice Carnival of 1735 and resurrected in 2005 under the title Bajazet. Here, under the musical direction of Ottavio Dantone, we have a sextet of dramatically engaged virtuoso soloists and an orchestra that is perfectly aware of Vivaldi’s musical dialectic.

It is impossible to be certain how much of Il Tamerlano was actually composed by Antonio Vivaldi...And yet this musical collage sounds unmistakeably Vivaldian...If the countertenor Filippo Mineccia’s Tamerlano with a thrilling drop into the chest register is primus inter pares, then Sophie Rennert as Irene his rejected bride and Delphine Galou’s Asteria match him...Dantone directs the Accademia Bizantina through three acts of unalloyed delight.

It is rare to encounter a studio recording that is for the most part such an electrifying experience...Dantone has assembled an outstanding cast that responds unerringly to direction that runs a gamut from fervent driving rhythms to a gossamer-like grace and lightness of touch...I cannot leave without praise for the razor-sharp playing of Accademia Bizantina, who respond to their founder’s inspiring direction as if their very lives depend upon it.