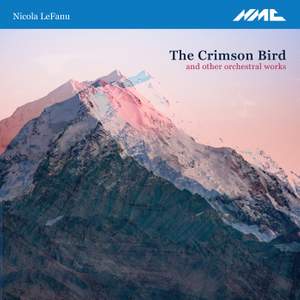 That LeFanu possesses an ear for finesse is evident from The Hidden Landscape (1973), with its oblique yet purposeful trajectory from the ominous, even confrontational to a gauntly imposing climax... — Gramophone Magazine, November 2020 More…

I. The Baby Wakes (Live)

II. Where Are You Going (Live)

III. Here Is Our Citadel (Live)

Nicola was born in England in 1947 to Irish parents; her mother was the composer Elizabeth Maconchy.

Here, for the fi rst time together, are four of Nicola LeFanu’s remarkable orchestral landscapes, written over a 45 year period. They are hidden and revelatory, imagined and remembered, liminal and arcadian, raw and sophisticated. Of all the works in her prolifi c output (including operas, music theatre, chamber works, songs) it is perhaps in these large- scale orchestral pieces that LeFanu’s exploratory spirit stands out the most, translating the language of each landscape she traverses into a unique sonic topography. – Kate Romano (liner notes extract)

'LeFanu is renowned for works of imaginative beauty, often drawing on diverse extra-musical prompts' (BBC Music Magazine). The Hidden Landscape was commissioned by the BBC and fi rst performed at the BBC Proms, 7 August 1973. It is this live recording (digitally remastered) that opens the album. Listening to this piece, and the work that follows (Columbia Falls) is rather like looking at the overall shape and contour of a landscape towards a distant horizon. LeFanu is, in life as well as art, a traveller and never happier than when she is outdoors. ‘I am not an urban person’ she says, ‘I need to be outside, using ears and eyes’.

The short orchestral piece Threnody was inspired by Brendan Kennelly’s The Trojan Women (his version of Euripides’ tragedy) which was to become the catalyst for LeFanu's much larger work, The Crimson Bird. The text is from the poem Siege by John Fuller and examines the bond between mother and son as it is tested within an environment of war and terror. LeFanu says 'It's an exploration of love, fear and death. Siege has a universal scope that speaks to human experience throughout time. Coverage from confl ict zones under siege fi ll our TV screens every day.'

That LeFanu possesses an ear for finesse is evident from The Hidden Landscape (1973), with its oblique yet purposeful trajectory from the ominous, even confrontational to a gauntly imposing climax and expectant close. Even greater subtlety is found in Columbia Falls...If both these pieces exude a certain impersonal quality, the plangent immediacy of Threnody (2014) is never in doubt. Nor is that of the Crimson Bird.

It’s fascinating to hear the 1973 world premiere of The Hidden Landscape, which prefigures some of George Benjamin’s recent work in terms of sonorities - but the main event here is the title-work, an intensely dramatic 25-minute monologue for soprano and orchestra setting a poem by John Fuller and portraying a desperate mother trapped in a city under siege; it’s powerfully sung (and with immaculate diction) by Nicholls, a celebrated Wagnerian who rides the thick orchestration with ease.