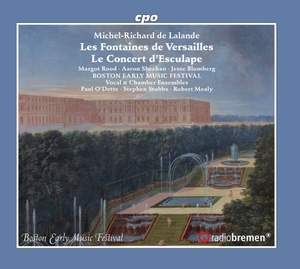 Michel-Richard de Lalande is regarded as one of the great composers of the French Baroque, and so it is not surprising that our prizewinning Boston Early Music Ensemble has now turned to him. Along with his many sacred works, Lalande also wrote for the various court occasions that required secular music. Les Fontaines de Versailles, the work occupying a central position on this CD, above all contributed to Lalande’s increasing popularity. It was performed on 5 April 1683, some weeks before Lalande was appointed to the coveted post of 'Sous-maître de Chapelle.' After the court had settled in Versailles with King Louis XIV in 1682, its musical microcosm also experienced a renewal. Les Fontaines de Versailles numbered among Lalande’s efforts to produce an oeuvre perfectly tailored for Versailles, both in its form as well as in its poetic content, thereby demonstrating his skill as a composer of 'French music' and displaying it in a proper light for the king. It is with refined sophistication that Les Fontaines de Versailles evokes the special relationship between the king and his gardens. Lalande beyond doubt occupied the first place among Louis XIV’s favorites: in 1689 the king named the thirty-one-year-old his »Surintendant de la Musique de la Chambre,« a post that before only Jean-Baptiste Lully and then one of his sons had held.