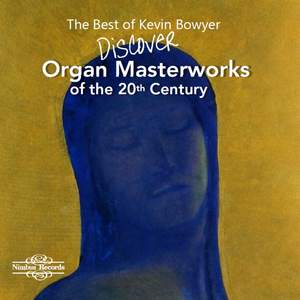 The Best of Kevin Bowyer: Discover Organ Masterworks of the 20th Century

Ridout, A: The Seven Last Words

I. Father forgive them: for they know not what they do

III. My God, my God, why hast Thou forsaken me?

IV. Verily I say unto thee: Today shalt thou be with me in paradise

VI. It is finished

VII. Father, into Thy hands I commend my spirit

Sixty years of contemporary organ music: from Nielsen's monumental masterpiece Commotio of 1931 through the colourful and sometimes challenging mid-century works of Schoeberg, Alain, Langlais, Górecki, Pärt and Glass, to the turn-of-the century works of Bowers-Broadbent and Burrell. This is a sonic spectacle demonstrating the power of the modern organ in both its sacred and secular roles.

...a solid and satisfying five-hour survey.