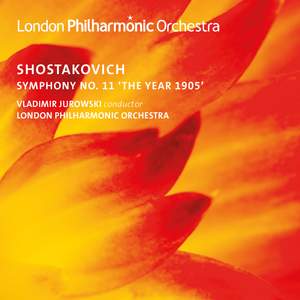 Jurowski seems to be making the point that this is a symphony of sorrowful songs, revolutionary and otherwise, until the musically re-imagined Palace Square massacre midway through the second... — BBC Music Magazine, December 2020, 4 out of 5 stars More…

II. The 9th of January. Allegro

This recording was taken from a live performance during the London Philharmonic Orchestra’s 2019/20 season at London’s Royal Festival Hall. The recording captures the thrill and electricity of the live performance

The original concert received rave press reviews at the time. The impact of the Orchestra’s performance was described by Jessica Duchen as “more than shattering,” while Classical Iconoclast called the performance “extraordinary valedictory, tender, and intensely committed.”

Vladimir Jurowski has long been associated with Shostakovich’s music, with The Times praising his “unflinching precision through rebellion, sorrow, anger and nightmare,” and The Financial Times adding “there are few conductors around to match Jurowski in Shostakovich’s symphonies.”

This is the first new release on the label of Shostakovich conducted by Vladimir Jurowski since ‘Symphonies Nos. 6 and 14’ in 2014. That release was named BBC Music Magazine’s CD Of The Month for November and was nominated for a 2015 International Classical Music Award.

The Symphony was written to commemorate and (quite graphically) tell the story of the failed uprising of 1905 in Moscow. It is studded throughout with references to revolutionary songs and serves both as a symbol of defiance against tyranny and a stark reminder of the timelessness of its subject. Throughout Autumn 2020 the Orchestra will be recording and broadcasting a series of online concerts. Full details, including dates and programmes, are yet to be announced.

Jurowski seems to be making the point that this is a symphony of sorrowful songs, revolutionary and otherwise, until the musically re-imagined Palace Square massacre midway through the second movement, a preciselyarticulated tornado. Everything moves inevitably towards that point, everything connects.

In Jurowski’s hands [the performance is] not junky at all, thanks to his refusal to milk the populist message, his precision and musicality, and an unfailing sense of drama that doesn’t spill over into vulgarity. Personally, I couldn’t ask for more

Jurowski recalls those songs as only a Russian could; their melancholy is personal. He is plainly set on dismissing once and for all the notion held by some that this marvellous piece is little more than glorified movie music...There is urgency and heat in Jurowski’s reading, and come the Bloody Sunday massacre at the fulcrum of the piece he seems to accentuate that it is music’s most methodical and rigorous form – the fugue – which Shostakovich uses to drive us towards systematic slaughter.