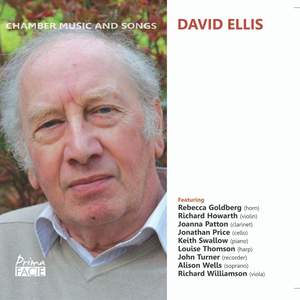 I. Round Dance (Lively with Humour)

I. You Did Not Know Me

II. Not These Sounds, My Friends!

III. If My Songs Were Given Wings

Ellis, D: A Little Cantata, for Soprano and Recorder

Ellis, D: An Image of Truth, for Soprano, Recorder and Piano, Op. 35a

II. The Gentle Touch of Purpose

IV. The Clouds Will Shroud the Fire

The music of David Ellis may have been somewhat eclipsed by that of his fellow contemporaries at the Royal Manchester College of Music, Birtwistle, Goehr and Maxwell Davies, but he had an extremely distinguished career as music producer and subsequently Head of Music for the BBC North Region, which left limited time for composition.

In his earlier years he had won numerous awards for his music, including the Royal Philharmonic Prize, the Royal College of Music Patrons' Award, and the Ricordi Prize. Following his retirement from the BBC he continued in musical administration as Artistic Director of the Northern Chamber Orchestra and subsequently worked in Portugal, helping with the founding of the Orquestra Sinfonica Portuguesa. Latterly he has devoted himself to composition, with a distinguished addition to his catalogue of chamber music, orchestral works and choral music.

This release includes a first recording, under the composer's own direction, of his two magical harp trios, one with violin and horn, and the other with viola and recorder. The disc also includes a suite of encores for solo recorder, made in the same sessions. Other works on this CD, songs and chamber music, appeared on a disc, no longer available, which was made for the composers 65th birthday in 1998.