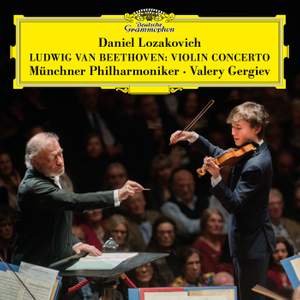 The violin is such a sensitive, flexible instrument that it conveys the player’s personality with utter transparency. Here I don’t hesitate in saying that Lozakovich is already a striking personality... — Fanfare, Jan/Feb 2021 More…

In 2020, the world celebrates the 250th anniversary of one of the greatest composers of all time: Ludwig van Beethoven!

Daniel Lozakovich has been dreaming about recording the Beethoven Violin Concerto since he was eight. He first performed it on stage when he was thirteen, and at fifteen was invited by Valery Gergiev to perform the concerto with him in Moscow. A few short years later, he has reunited with his mentor Gergiev to record the Beethoven with the Münchner Philharmoniker for Deutsche Grammophon The new recording captures Lozakovich’s close artistic partnership with Russian conductor Valery Gergiev Lozakovich was clear from the start that this should be a live recording: “There’s a particular magic about a live concert,” he explains. “The audience creates a unique atmosphere, without which, in my opinion, it’s almost impossible to produce a performance that will stand the test of time.”

Beethoven’s Opus 61 undeniably stands in a category by itself. Lozakovich goes as far as to call it the greatest concerto of all time and the nineteen year old is quick to clarify that he doesn’t just mean the greatest violin concerto: “No, it really is the greatest concerto ever written.” He points to the work’s incredible purity, underlining the clarity and lack of complexity with which it is written. And yet, as he adds, it has enormous depth as well: “ The beauty of its themes is almost impossible to put into words.”

The violin is such a sensitive, flexible instrument that it conveys the player’s personality with utter transparency. Here I don’t hesitate in saying that Lozakovich is already a striking personality of remarkable cultivation and musical instincts. His future should be a rising arc of triumphs.

This latest Beethoven Violin Concerto recording might, in a sense, be called a ‘Homage to Fritz Kreisler’...But there’s always room for a warm, vibrant rendition such as Lozakovich offers us here, with wellchosen tempos and Valery Gergiev cueing a strong, sonorous account of the orchestral score. Although relatively spacious, it’s never sluggish or ponderous, and there’s plenty of inner detail on offer.