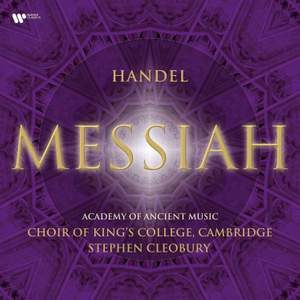 In 2009 in commemoration of the 250th anniversary of the death of George Frideric Handel, and the 800th anniversary of the University of Cambridge, the Choir of King's College, Cambridge performed Handel's best known work, Messiah, on Palm Sunday, April 5 2009 in the magnificent setting of King's College Chapel. The performance was conducted by Stephen Cleobury, who sadly passed away last year, and featured the Academy of Ancient Music and soloists Ailish Tynan, Alice Coote, Allan Clayton and Matthew Rose. This event was broadcasted live in many cinemas around Europe, US and Canada and released on CD and DVD. It is now available on vinyl for the first time.