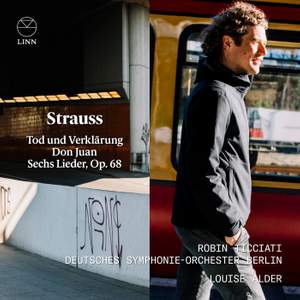 When orchestral sonorities and engineering coincide like this, the result in Strauss is thrilling...Ticciati’s winged uplift gilds the afterlife beautifully, while there’s dynamic restraint and... — BBC Music Magazine, December 2020, 5 out of 5 stars More…

I. An die Nacht

The conductor talks to Katherine about his recording of Tod und Verklärung, Don Juan, and the Brentano-Lieder with the Deutsches Symphonie-Orchester Berlin and soprano Louise Alder, out now on Linn.

• For his fifth recording with the Deutsches Symphonie-Orchester Berlin, Robin Ticciati conducts a captivating programme of Richard Strauss including Tod und Verklärung and Don Juan. • The scandalous story of the insatiable Don Juan forms the inspiration for a tone poem which is rich in imagination and dramatic flourishes.

• Tod und Verklärung is further testament to Strauss’s vivid imagination; his exploration of the mystery of death and what may follow was written when he was only twenty-five.

• Ticciati is a consummate Straussian, as his triumphant Rosenkavalier at Glyndebourne demonstrated, and his complete control of phrase shape and dynamics delivers performances of tremendous power and lucidity.

• Soprano Louise Alder joins Ticciati and the DSO to record what she describes as ‘a fiendish but beloved cycle of Strauss songs’: Sechs Lieder, Op. 68, affectionately known as the Brentano Lieder.

• The recording will be released to coincide with Ticciati’s fourth season as Music Director of the DSO.

When orchestral sonorities and engineering coincide like this, the result in Strauss is thrilling...Ticciati’s winged uplift gilds the afterlife beautifully, while there’s dynamic restraint and atmosphere around Don Juan’s two love episodes, and magical woodwind solos throughout...Alder handles it all with personality and luminous security throughout a wide register.