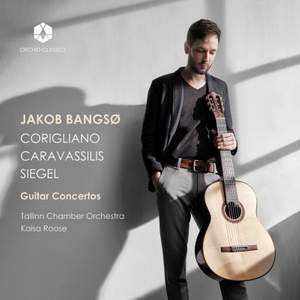 Bangsø tackles [Corigliano's] blend of nostalgic reverie and jauntily surreal, quasi-medieval episodes with just the right kind of understated verve. It’s the clear highlight of an album which... — BBC Music Magazine, November 2020, 3 out of 5 stars (Performance) / 4 out of 5 stars (Recording) More…

Award-winning Danish guitarist Jakob Bangsø presents three contemporary guitar concertos: John Corigliano’s Troubadours, alongside world-premiere recordings of works inspired by Corigliano’s piece and written for Bangsø: Wayne Siegel’s Chaconne and the Saudade by Constantine Caravassilis. American composer John Corigliano’s Troubadours was partly inspired by medieval musicians, and incorporates a theme by the La Comtessa, Beatritz de Dia, into its evocative material. Fellow American Wayne Siegel also draws upon earlier precedents in his Chaconne, collaborating with Jakob Bangsø to create a piece that slowly unfolds and evolves, while Canadian composer Constantine Caravassilis uses Greek folk-music as part of his Saudade, a title that comes from a Portuguese word suggestive of bittersweet memories. Aaron Copland on John Corigliano: “One of the most talented composers on the scene today – the real thing. His music is individual, imaginative, expertly crafted, and aurally quite stunning.”

Bangsø tackles [Corigliano's] blend of nostalgic reverie and jauntily surreal, quasi-medieval episodes with just the right kind of understated verve. It’s the clear highlight of an album which benefits throughout from able partners in the Talinn Chamber Orchestra under conductor Kaisa Roose.

It’s always good to see younger guitarists continuing the tradition of commissioning new concertos for their instrument, especially when the resulting works are as substantial and attractive as the two which here receive their first recordings...Bangsø is more guide than lone poet; or, better, a true collaborator, even when in declamatory mode, his playing equal to that of the superb Tallinn Chamber Orchestra under the ever-sensitive Kaisa Roose.