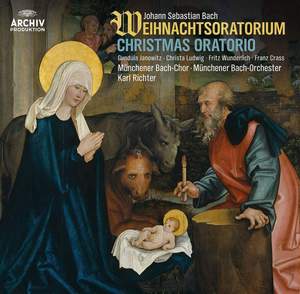 Among the many recordings of Bach’s Christmas Oratorio, Karl Richter ’s 1965 interpretation holds a special position Richter was praised not only for his ensembles, the Münchener Bach Chor and Münchener Bach Orchester but also for his fabulous soloists both vocal and instrumental This recording also turned to be one of the last musical testimonials of tenor Fritz Wunderlich who tragically died only a few months after, and whose 90 th birthday would be celebrated this September This was Richter’s second recording of the work, markedly different to his first In his 1965 recording, Richter’s Munich forces present a youthful vigour with a homogeneity and clarity not otherwise present in his earlier account, though most notable is his quartet of outstanding soloists Wunderlich is joined by Gundula Janowitz, Christa Ludwig, and Franz Crass Gramophone described the recording thus ::“Richter is the ultimate purposeful and charismatic director and presents a corporate muscularity juxtaposed with solo vocal warmth, especially from the luminous Janowitz and Wunderlich The sensational trumpet playing of Maurice André aside (the last chorus the finest on disc), Richter yields irregularly to the emotional possibilities