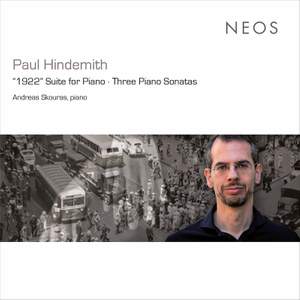 Hindemith: Piano Sonata No. 1 in A Major "Der Main"

Hindemith: Piano Sonata No. 3 in B flat major

Shortly after Hitler was appointed Chancellor in January of 1933, rumours circulated that Hindemith's music had officially been banned as degenerate. Nervous concert organisers reacted to the rumours by removing Hindemith's works from their programs and stopped inviting him as a soloist. The premiere of his Symphony "Mathis der Maler" ("Mathis the Painter") in March of 1934 triggered a monthlong journalistic exchange between reactionary German National Socialist culture guards, who denigrated his music as "culturally Bolshevik", and more moderate-minded Hindemith supporters. Then, in December of 1934, the Minister of Public Enlightenment and Propaganda Joseph Goebbels pronounced: "Certainly, in view of the unspeakable paucity of truly productive artists which is now prevalent throughout the world, we cannot afford not to have a real German artist. But then he should be a real artist, not some atonal noisemaker." Hindemith's indefinite leave of absence from his professorship at the Berlin University of Music, further darkened his future prospects in Germany. In the midst of this situation, Hindemith accepted an offer from the Turkish government to develop plans for Western European-oriented music conservatory in Ankara, for which, by 1937, he had made a total of four weeks-long trips to Turkey. There, in April of 1936, he began work on the first piano sonata.

As the host of the Olympic Games in 1936, Berlin was temporarily open and liberal for a summer. If Hindemith had hoped to improve his own prospects based on this short-lived moment, he was soon disappointed. An official ban on the performance of all of his works, which was enacted in October of 1936, prevented the premiere of his First Sonata by Walter Gieseking and the planned premiere of the Second Sonata. The Third Sonata was presented in private concert before an invited audience in London by Hindemith's pupil Franz Reizenstein, an emigre to England; the Puerto Rican pianist Jess Maria Sanromá performed the public premiere in New York in April of 1937. Despite the ban on performances, all three works appeared in print in early 1937. - Susanne Schaal-Gotthardt