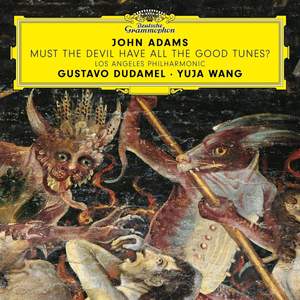 Pre-order,   Offer, John Adams: Must the Devil Have All the Good Tunes? - Vinyl Edition

Adams, J: Must the Devil Have All the Good Tunes?

World Premiere Recording by the Grammy-winning team of Los Angeles Philharmonic and Gustavo Dudamel. Featuring star Yuja Wang at the piano. The work was commissioned by Los Angeles Philharmonic and was inspired by an article about Dorothy Day in the New Yorker: “That’s a good title just waiting for a piece. The phrase suggested a ‘Totentanz’, only not of the Lisztian manner, but more of a funk-invested American-style.” John Adams Featuring a bonus track with huge streaming potential: China Gates by John Adams “Uneasily Fascinating ... beautifully disconcerting concerto” New York Times