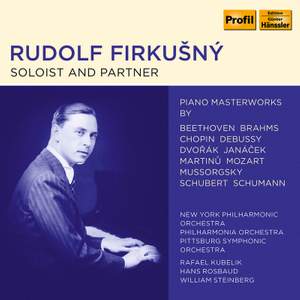 No. 4 in a Flat Major - Allegretto

No. 1 in F Minor - Allegro moderato

No. 2 in a Flat Major - Allegretto

No. 3 in B Flat Major - Thema. Andante - Variations

No. 4 in F Minor - Allegro scherzando

II. Serenade for the Doll

III. The Snow Is Dancin

The barn owl has not flown away

Born in southern Moravia in 1912, Firkušný and his mother moved to Brünn (now Brno) after the early death of his father. There he attended the local conservatory, whose teachers included Leoš Janáček. The teenage Firkušný’s unmistakable talent won him numerous scholarships and enabled him to complete his studies in Prague. His career as a concert pianist began in London in 1933 and he was soon playing in the great centres of music across Europe. He travelled to New York in 1938 and went on to tour North and South America. The German occupation of Czechoslovakia in 1939 prompted him to take refuge in Paris, from where he travelled to the USA by way of Portugal in 1940. A celebrated concert of 1941 in New York’s Town Hall gave Rudolf Firkušný his own opening to a successful career in the New World. This showed no sign of abating when he returned to his native Czechoslovakia after the end of the war. But soon he felt the growing pressure from the Soviet Union. Back in the United States, he pursued the career of a musical cosmopolitan. He taught at the Juilliard School of Music in New York, and he was on the board of the Berkshire Music Center in Tanglewood, Massachusetts. Rudolf Firkušný died in Staatsburg in New York in 1994.