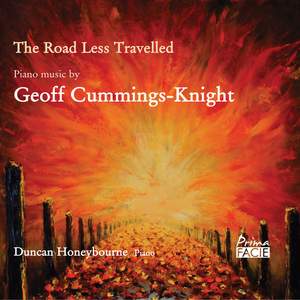 Kolomenskoe on a Cloudy Day

Prima Facie's latest release features the English pianist Duncan Honeybourne in the first commercial recording of the work of composer Geoff Cummings-Knight (b.1947), whose contribution to British musical life in recent decades has been self-effacing but of consistent and remarkable quality. His solo piano music is highly distinctive, impassioned and lyrical, and its appearance on disc long overdue.

Cummings-Knight was born in Colwyn Bay and grew up in Yorkshire. He studied at Goldsmiths College, the Birmingham School of Music and Leeds University, gaining BMus and MA degrees. His numerous compositions include a cantata The Turning Year, two symphonies, chamber works, choral settings, stage works and a symphonic prelude The Infancy of Hercules. In 1986 Geoff was a finalist in the Barclaycard Composer of the Year competition and in 1998 his work was featured in the TV series Heartland FM.

His works have been widely performed and broadcast on BBC Radio 3 and his Piano Concerto, premiered in 1985 by Philip Challis and the Worthing Symphony Orchestra underJan Cervenka, received a further acclaimed performance in Birmingham's Adrian Boult Hall.

The piano works on this disc range from two of the early, vividly descriptive Russian Tableaux - composed in 1970 and broadcast by Philip Challis on BBC Radio 3 in 1984 to the magisterial and richly-contoured Sonata in C sharp major, premiered by Duncan Honeybourne in 2011.

Honeybourne writes that Cummings-Knight's "creative road is a rewarding one and his substantial catalogue of piano music central to any consideration of it. This is a journey on which I am honoured and delighted to accompany the inquisitive and enterprising listener."