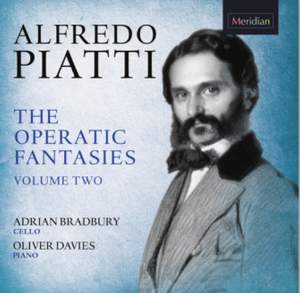 This is Adrian Bradbury’s second disc of Piatti’s operatic fantasies and as usual with this repertoire a little goes a long way, though there’s no disputing that Piatti can spin an altogether... — Gramophone Magazine, August 2020 More…

Playing from original manuscripts found in the Donizetti Library in Bergamo, Bradbury and Davies present the repertoire through which Piatti bewitched audiences across Europe with his technical wizardry and peerless cantabile tone. Piatti, a native Italian, became England’s - especially Queen Victoria’s - favourite cellist. He partnered all the great European performers of the era (like Joachim, Mendelssohn, Grieg and Clara Schumann) and gave frequent concerto performances under conductors including Mendelssohn, Berlioz and Max Bruch. Many composers dedicated works to him, notably Sullivan, Verdi (solo in I masnadieri) and Mendelssohn (a concerto, sadly lost in transit). His operatic fantasies were borne from his vast experience in opera houses from the age of eight, latterly as principal cello of the Royal Italian Opera, Covent Garden. He carefully annotated these fantasies with bel canto markings to imitate the performance practice of singers he accompanied - Jenny Lind, Giuditta Pasta, Giulia Grisi, Giovanni Battista Rubini, Luigi Lablache, Antonio Tamburini and Michael Balfe - making this disc essential listening for cello lovers and opera lovers alike. These discs were conceived back in 2011 when the Royal Academy of Music (RAM) and the London Cello Society approached Adrian and Oliver to give a concert celebrating Piatti, a longtime RAM Professor. As Adrian and Oliver explored concert programmes and newspaper reviews from the 1840’s, it became clear that the items most delighting those audiences were Piatti’s own virtuosic display pieces – his Fantasies on operatic arias of the day. One of the Fantasies earning the young Piatti such acclaim - on Bellini’s Beatrice di Tenda – lay unpublished, existing only as fragments of manuscript in the Piatti archive in Bergamo. Adrian and Oliver’s reconstruction of it for this concert began a ten-year love affair with the repertoire culminating in these recordings.

This is Adrian Bradbury’s second disc of Piatti’s operatic fantasies and as usual with this repertoire a little goes a long way, though there’s no disputing that Piatti can spin an altogether superior class of tinsel...His interpretations have a red-blooded, horsehair-and-rosin quality that gives them the immediacy of a live performance, nicely capturing the physical thrill of Piatti’s often spectacular fireworks as well as the wholly fitting bel canto warmth of Bradbury’s more lyrical playing.

The fun quotient here is enormous, with Bradbury’s very vocal cello prancing up and down melodies, mostly by Donizetti, elaborated by Piatti close to the point where absurdity begins. In the circumstances, Oliver Davies’s piano accompaniments might have displayed more sparkle, but that’s the only drawback to this life-enhancing album.