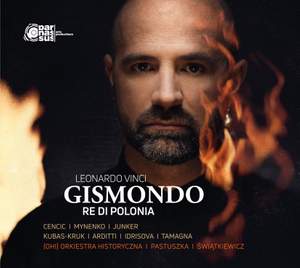 The Polish band {oh!} Orkestra Historyczna crackles with vigorous theatricality. The Sinfonia bursts with full-throttle energy and tension – and this is how arias are played too, although there... — Gramophone Magazine, October 2020 More…

Unlike today, neither George Frideric Handel nor Antonio Vivaldi was the most famous and most performed opera composer in the first third of the 18th century, but rather Leonardo Vinci (ca. 1696-1730). Educated in Naples, he was successful there from 1719, initially with several operas buffe before he turned to the more prestigious opera seria in 1722 with immediate success. As one of the most important representatives of the Neapolitan School, he left his mark on the Italian and soon also the European opera scene. Even Handel in faraway London could not avoid his music: in order to satisfy the public's taste, he put several pasticcios with their arias on the repertoire of his failing opera company. In 1730 Vinci died suddenly after colicky pains, and it was soon rumored that he had been the victim of a poison attack. Vinci's early death abruptly ended his influence on the further history of opera, which meant that his brilliant pieces with highly virtuoso highlights were forgotten by the prima donnas and star castrati of the time. Only in our century did the deserved renaissance of his music on stage and on recordings begin. Vinci's opera seria Gismondo, Re di Polonia, first performed in 1727 at the Roman Teatro delle Dame, is another unjustly forgotten masterpiece of the composer, presented here by PARNASSUS ARTS PRODUCTIONS. The new label has set itself the goal of performing rare and unknown historical opera works again and to make them known to a wide audience on CD. Vinci's opera has already celebrated sensational triumphs in concert in Vienna, Moscow and Warsaw in 2018 in front of an almost enraptured audience. No wonder, since the CD recording features a hand-picked group of singers around the star countertenor Max Emanuel Cencic. The recording is accompanied by the excellent original sound ensemble {oh!} Orkiestra Historyczna under the direction of Martyna Pastuszka.

The Polish band {oh!} Orkestra Historyczna crackles with vigorous theatricality. The Sinfonia bursts with full-throttle energy and tension – and this is how arias are played too, although there is sophistication and subtlety when required. Recitatives have fulsome continuo realisations that roll and thrust extrovertly...The emotional core of Acts 2 and 3 reconfirm Vinci as the foremost Italian musical dramatist of his generation.