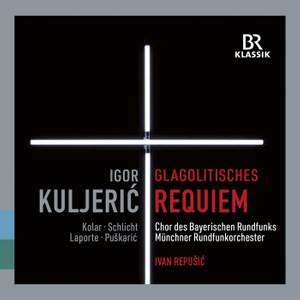 The music of the Croatian composer and conductor Igor Kuljerić (1938-2006) is not yet well-known beyond the borders of his home country – but this recording will probably change all that. The "Croatian Glagolitic Requiem" - composed between 1995 and 1996, first performed in the Croatian town of Zadar in July 1996 by the chorus and symphony of Croatian Radio, and conducted by the composer himself - is an impressive and moving example of contemporary sacred music. The CD also contains a recording of the "Himna Slobodi" (“Hymn to Freedom”, also “Peace Hymn”) by the Croatian composer Jakov Gotovac (1895-1982), based on a text by the baroque poet Ivan Gunduli . The studio recording, with the Bavarian Radio Chorus and the Münchner Rundfunkorchester conducted by Ivan Repuši , was made in January/February 2019.