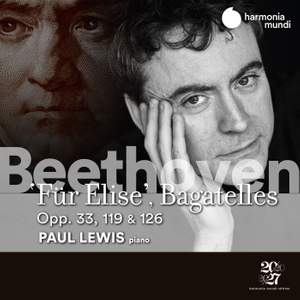 This disc serves to remind us how much marvellous music Beethoven wrote where there isn’t a scowl in sight…Throughout, Paul Lewis plays with the most natural, relaxed but concentrated enjoyment,... — BBC Music Magazine, October 2020 More…

The British pianist's survey of Beethoven's complete output in the genre (plus the Fantasia Op. 77 and three opus-less Klavierstücke) radiates wit, warmth and wisdom.

The British pianist talks to Katherine about his recording of the Bagatelles (out today on Harmonia Mundi), and about the composer's often 'uncompromisingly uncomfortable' writing for the piano.

When we think of Beethoven and the piano, his monumental 'Thirty-Two Sonatas' come to mind. They have often been referred to as the 'New Testament' to Bach's 'Old Testament', the 'Well-Tempered Clavier'. However, over a period of decades, Beethoven constantly returned to the genre of the 'Bagatelle'. He called them 'trifles', but this small form par excellence actually meant a great deal to him. As with the 'Sonata', Beethoven laid the foundations for a flourishing new genre of piano miniatures. Whether they last a few minutes or a few seconds, these 'Bagatelles' are masterpieces, rendered with in all their brief perfection by the infallible Paul Lewis.

This disc serves to remind us how much marvellous music Beethoven wrote where there isn’t a scowl in sight…Throughout, Paul Lewis plays with the most natural, relaxed but concentrated enjoyment, instantly communicated to the happy listener. A delightful disc altogether, warmly recommended.

As you’d expect from such an experienced Beethoven performer as Paul Lewis, there’s a confidence in every track...What is also particularly telling is the way he creates the sense of a bigger structure over the course of an opus, even where that involves a study in contrasts....Lewis always giv[es] due consideration to Beethoven’s highly contrasting musical ingredients....All told, another hugely impressive disc from one of our greatest Beethovenians.

Lewis's affection and respect for these still-underappreciated little pieces is evident from the very first phrase of this lovely recital as he launches into Op. 33 with the musical equivalent of a raised eyebrow, the wry stretching of the upbeat hinting at a smörgåsbord of surprises in store...This is altogether a wonderful album, and the most eloquent of postscripts to the pianist’s towering survey of the complete piano sonatas.

Combining expressive variety and technical ease, Lewis delights in the wit too. Even Für Elise, beaten to death by every would-be and would-not-be learner, becomes tolerable in his hands.