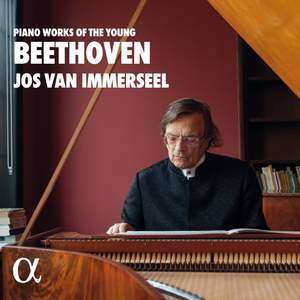 Jos van Immerseel plays a 1988 copy by Christopher Clark of an 1800 Anton Walter fortepiano. This instrument strikes the ideal balance of songfulness and bite, besides offering a magnificent... — BBC Music Magazine, November 2020, 4 out of 5 stars (Performance) / 5 out of 5 stars (Recording) More…

A leading authority on the fortepiano, Jos Van Immerseel has devised a programme focusing on the music Beethoven composed for a Viennese piano with a range of five octaves. This includes the finest keyboard music from Beethoven's early Viennese period, more specifically works written between 1795 and 1804. For this recording, the Flemish pianist has used the composer's extant autograph manuscripts or the first editions published shortly after composition, as well as the latest critical edition by Jonathan Del Mar (Kassel: Bärenreiter-Verlag, 2017-18). The writings of Carl Czerny, one of Beethoven's most important pupils , were also a significant source of information. With his customary attention to the instrumentarium, Jos Van Immerseel has opted for a five-octave Viennese grand fortepiano by Christopher Clarke, a masterly replica, built in 1988, of an instrument by Walter, whom Beethoven himself selected in 1802 from among the sixty or so Viennese piano makers of the time.

Jos van Immerseel plays a 1988 copy by Christopher Clark of an 1800 Anton Walter fortepiano. This instrument strikes the ideal balance of songfulness and bite, besides offering a magnificent range of colouristic potential across its different registers: a satisfying darkness in the bass (splendid in the Pathétique) offset by a bright, forward treble, and distinctly different, veiled tones when muted...it is a deeply rewarding set that accentuates underrated facets of this most communicative of composers.

There are some genuine interpretative gems here. In the Moonlight Sonata, for instance, the Adagio sostenuto is nothing short of breathtaking, with the indication senza sordino (without dampers) scrupulously observed, creating an ethereal aura of impenetrable mystery that simply can’t be achieved on a modern instrument… The Pastoral is another beautifully realised conception, with the piano’s sonorities skilfully exploited to aid and abet the character of the music at every turn.