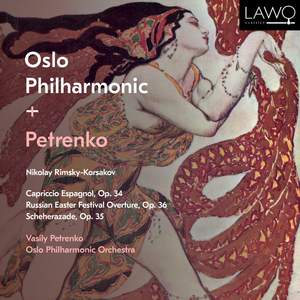 What results from these insights is a Scheherazade that makes even some famous rivals seem lazy and careless. Here we get finesse and detailed music-making that brings delight back to a score... — Fanfare, Nov/Dec 2020 More…

I. The Sea and Sinbad’s Ship

II. The Tale of The Kalendar Prince

IV. Festival at Baghdad – The Sea – The Shipwreck

Recording of the Week,  Rimsky-Korsakov from Vasily Petrenko and the Oslo Philharmonic Orchestra

As on their recent series of Strauss tone poems, the Russian conductor and his Norwegian orchestra prove themselves master story-tellers on this trio of showpieces from the late 1880s.

The Russian conductor talks to Katherine about today's Recording of the Week and reflects on his time with the Oslo Philharmonic Orchestra.

It was Nikolay Rimsky-Korsakov's older brother, Voin, who first put ideas of travel, ships and the sea into the would-be composer's head. The young Nikolay had never set foot aboard a boat but Voin's evocative letters home from the Far East, where he was stationed in the Imperial Russian Navy, proved more than sufficient. In 1856, he enrolled as a naval cadet and completed six years of training. Barely a year into his studies at the naval academy, the young Nikolay saw his first opera. Soon he heard symphonies by Beethoven and Mendelssohn and encountered a piece by his senior Mikhail Glinka, Jota Aragonesa. Even before he embarked on a three-year voyage around the world aboard a clipper, Rimsky knew he wanted to be a composer, not a seaman. Afterwards, having sailed into some of the great ports of the world, he returned home happy never to leave Russia again the only journeys Rimsky wanted to make were musical. The Oslo Philharmonic under the baton of Vasily Petrenko perform Rimsky-Korsakov's Capriccio Espagnol, Op. 34, coupled with the Russian Easter Festival Overture, Op. 36 and Scheherazade, Op. 35, Symphonic Suite On this brand new recording from Lawo Classics. Vasily Petrenko is one of the most significant and galvanizing musicians alive. He is one of the most acclaimed classical recording artists alive and has won numerous accolades for his recordings of Russian repertoire, including two Gramophone awards. With the Oslo Philharmonic, he has recorded Shostakovich and Szymanowski concertos, Romeo and Juliet by Prokofiev, as well as two major cycles of orchestral works by Alexander Scriabin and Richard Strauss respectively. This new recording of Rimsky-Korsakov with the Oslo Philharmonic continues their journey together and is sure to generate critical acclaim. Previous Strauss recordings were selected as "Editor's Choice" by Gramophone Magazine and were universally critically acclaimed: Gramophone Magazine: "There's no lack of excitement or, where needed, bombast, and the Osloers' sound at full throttle is thrilling, their playing superb." The Sunday Times: "As Petrenko's tenure in Oslo begins to wind down, he revels in the standards of orchestral virtuosity he has attained with this excellent band in two Strauss tone poems that challenge all instrumental departments...the Osloers shine brilliantly."

What results from these insights is a Scheherazade that makes even some famous rivals seem lazy and careless. Here we get finesse and detailed music-making that brings delight back to a score most of us have known since our teens and relegated to light classics.

Petrenko has a keen ear for drama and his Sheherazade is full of dash and derringdo, often with tempos to match. There is plenty of momentum to Sinbad’s ship and a lively storm and shipwreck in the outer movements...The Capriccio espagnol is immaculate, if lacking some Mediterranean earthiness...the recording’s big-boned sound produces plenty of power and permits all the percussion glitter required in the joyful finale [of the Overture].

The album serves as a colourful summary of everything which Petrenko and the orchestra have achieved together over the past seven years: immaculate ensemble, individual and collective virtuosity, and above all the gift for compelling musical story-telling which also made their series of Strauss tone-poems such a joy.

[Petrenko's] impact has been potent. Here he conducts a Russian classic, Rimsky’s pictures of Arabian Nights derring-do and voyages across the sea, which swells through the orchestra’s rhapsodic ebb and flow. The concertmaster Batnes is beguiling.