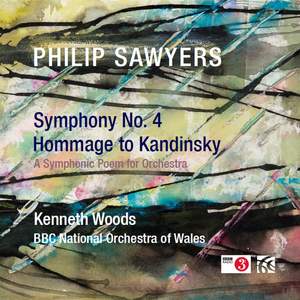 Sawyers’s Fourth Symphony is scored for an orchestra of two flutes, two oboes, two clarinets, two bassoons, four horns, two trumpets, three trombones, tuba, timpani, bass drum, cymbals and strings. Structurally, it marks a departure from his First and Third Symphonies, which are both in the traditional four-movement form, and the one-movement Second. Sawyers says of the somewhat unusual structure that: My Fourth symphony is in three movements. “Why?” might be a reasonable question. The answer is that simply that by the time the third movement was complete, there was nothing more to say.