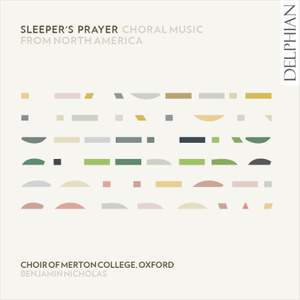 Merton’s new choral foundation aimed to combine tradition with bold innovation and they pull that off here with some daring. The programme alternates post- minimalist work by David Lang with... — Choir & Organ, May 2020, 4 out of 5 stars More…

Muhly: A Hymn on the Nativity

Larsen, L: I will sing and raise a psalm

Muhly: A Song of Ephrem the Syrian

In barely a decade of existence, Merton College’s new choral foundation has ambitiously redened the choral landscape of the great university city of Oxford through its twin commitment to excellence & innovation.

Now, focusing entirely on American music of the late twentieth and early twenty first centuries, this latest in a series of thematically conceived recordings begins as a striking ‘double portrait’ of two composers who have written or arranged works especially for the choir. David Lang’s austere choral postminimalism, informed by a background of Jewish liturgy and thought, provides a striking foil to Nico Muhly’s more richly referential approach; Muhly fell in love with the Anglican tradition as a young chorister in Rhode Island.

Two solo organ works by Muhly, and a transcription from his mentor Philip Glass’s opera Satyagraha, widen the expressive gamut still further – from whimsical allusiveness to meditative calm – and are set in context alongside the more stylistically eclectic yet no less powerfully communicative sound-worlds of Libby Larsen and Abbie Betinis.

Two final choral items draw on pre-existing traditions of the spiritual and the Baptist hymnal in moving demonstration of the New World’s ability to honour its past while gazing rmly ahead.

Merton’s new choral foundation aimed to combine tradition with bold innovation and they pull that off here with some daring. The programme alternates post- minimalist work by David Lang with more familiarly Anglican material by another contemporary Nico Muhly, including the wonderful The Revd Mustard His Installation Prelude, written for a London friend. The Merton singers are in great voice and Merton Brass could dep for the angels.

Merton’s relationship with Delphian extends back nearly a decade, and you can hear the changes under Nicholas’s careful direction – in the softer-edged blend, the more bass-anchored sound. Both of which come in handy here.

Muhly’s Senex puerum portabat has a deeply traditional quality even as it comes over with freshness and inventiveness. His enjoyable organ solos further the impression the disc tends to give of bad boys on their best behaviour.