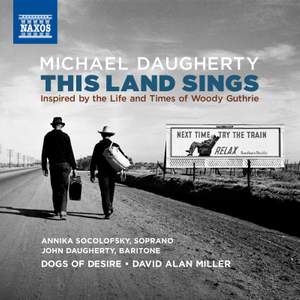 Daugherty: This Land Sings (Inspired by the Life and Times of Woody Guthrie)

Daugherty: This Land Sings (Inspired by the Life and Times of Woody Guthrie)

No. 2, The Ghost and Will of Joe Hill

No. 12, This Trombone Kills Fascists

In This Land Sings, GRAMMY Award-winning composer Michael Daugherty has created an original musical tribute to the singer-songwriter and political activist Woody Guthrie (1912–1967). Traveling the backroads of America from coast to coast with a guitar and harmonica, Woody Guthrie performed folk songs of love, wandering and social justice during the Great Depression and the Second World War. Daugherty has composed his own original songs and instrumental interludes that give haunting expression, ironic wit and contemporary relevance to political, social and environmental themes from Guthrie’s era. Under the baton of GRAMMY Award-winning conductor David Alan Miller, the Albany Symphony’s new music ensemble Dogs of Desire, joined by soprano Annika Socolofsky and baritone John Daugherty, give a poignant and rousing performance.