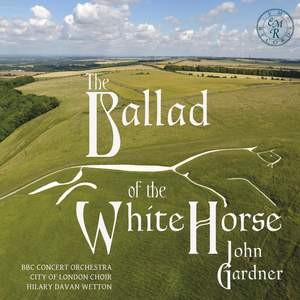 John Gardner: The Ballad of the White Horse

Gardner, John: The Ballad of the White Horse

The Ballad of the White Horseis a major choral work which has largely remained unheard since its premiere in 1959. It is a tour de force of orchestral and choral writing by a composer who was hugely inspired by the Chesterton's epic poem telling the story of King Alfred's defiance of the Viking invaders in the 9th Century. Here is it performed by BBC Concert Orchestra, City of London Choir and Hilary Davan Wetton.

The CD is completed by the orchestral "An English Ballad", effectively an English tone poem inspired by the classic tale of a lady eloping with a Gypsy. It features a solo electric guitar prominently, reflecting Gardner's view of the significance of the electric guitar in 20th Century music. Both pieces, originally written for amateur performers, are highly approachable and enjoyable. As the review of the premiere ofThe Ballad of White Horse said, "music that is a pleasure for [the choir] to sing and easy for an audience to appreciate. But this simplicity masks a wealth of ingenuity in invention and treatment".