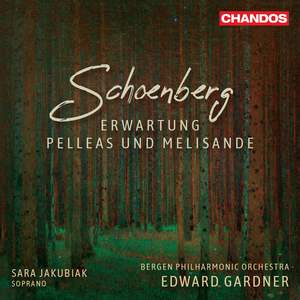 Gardner is swift but never careless [in Pelleas]...Erwartung holds exceptional appeal for Sara Jakubiak’s intense restraint, her conversational familiarity with the text and the luminous rapture... — Gramophone Magazine, July 2020 More…

The British conductor talks to Katherine about his recording of Erwartung & Pelleas und Melisande, released on Chandos last month, and socially-distanced music-making in Bergen.

Written only six years apart, these two works share a common narrative of frustrated love, and the concept of the forest as a metaphor for the subconscious mind. Musically they are wildly different, however; Pelleas, which Schoenberg wrote in his late twenties, is the epitome of his late romantic style, indebted to Richard Strauss. Erwartung (his first work for the stage) was written after his conversion to atonality. Maurice Maeterlinck’s play Pelleas et Melisande fired the imaginations of several of the greatest composers of the time. Debussy began writing his opera almost immediately after its publication in 1892, and within a decade or so Faure and Sibelius had created elaborate incidental scores for different stage productions of the play. Schoenberg composed his tone poem in 1902 – 03, for a large-scale (Straussian) orchestra. Schoenberg seems to have put himself into a state of free association to write Erwartung, which he completed in just seventeen days in August 1909. ‘In Erwartung, the aim is to represent in slow motion everything that occurs during a single second of maximum spiritual excitement, stretching it out to half an hour’, he wrote. Not only the first solo opera, this is perhaps also the first cinematic one.

Gardner is swift but never careless [in Pelleas]...Erwartung holds exceptional appeal for Sara Jakubiak’s intense restraint, her conversational familiarity with the text and the luminous rapture of her singing...For this coupling it’s an obvious first choice, but also a first port of call for anyone still resistant to the idea that Expressionist Schoenberg can, and should, sound beautiful.

Few of the conductors and sopranos who have teamed up on record (or in the theatre) make Erwartung sound more natural than Edward Gardner and Sara Jakubiak. Jakubiak sings with an agility that sounds ideal, avoiding any hint of the squalliness that all too often feels like an inevitable part of the Erwartung soundscape...a sympathetic account of the work with few real rivals on disc.

Gardner and his Bergen orchestra follow their outstanding account of Gurre-Lieder with a coupling of works that demonstrate even more starkly Schoenberg’s journey towards atonal modernism...The lush harmonic world of the orchestral piece offsets the drama’s pristine beauty, and Gardner’s clear-sighted vision finds shafts of light through the moonlit “forests” of Schoenberg’s orchestration.

[Gardner] keeps the music’s sumptuousness on a tight rein, favouring tempi that are faster than most interpreters...But he makes sure the shape of the huge musical structure is never compromised, and there’s no lack of tonal weight when required from the Bergen Philharmonic...Jakubiak is a compelling soprano soloist too, far less histrionic and squally than some.