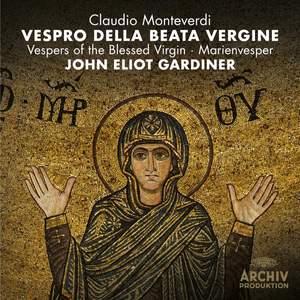 In March 1964, as a student at King’s College, Cambridge, John Eliot Gardiner led a performance of Monteverdi’s Vespers that not only launched his career as a conductor, but also provided the impetus to create his world-renowned Monteverdi Choir. In 1989, to mark the Monteverdi Choir’s 25th anniversary, he made the legendary live recording in St. Mark’s, Venice (where Monteverdi had held the position of maestro di cappella), which is re- presented in this new cap-box edition. This performance was also filmed by the BBC, and is included alongside the CDs.

❖ Includes exclusive interview with John Eliot Gardiner, which explores his affinity to the Monteverdi Vespers

❖ Repertoire notes by John Eliot Gardiner (from the original release)