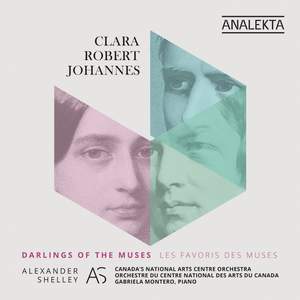 [Montero’s] playing is free-spirited, fire-centred and uninhibitedly expressive, with a sense of rhetoric and flexibility that suggests the Romantic era itself: you can almost see the young Clara... — BBC Music Magazine, September 2020, 4 out of 5 stars (Performance) / 3 out of 5 stars (Recording) More…

The new album Darlings of the Muses by Canada’s National Arts Centre Orchestra under the direction of Alexander Shelley is the first of four albums to be released over the next two years. This series will explore the closely intertwined personal and artistic connections between three musical giants: Clara Schumann, Robert Schumann and Johannes Brahms. The album includes Robert Schumann and Johannes Brahms’ First Symphonies, Clara Schumann’s Piano Concerto Op. 7, her first (and last) multimovement orchestral work, and Gabriela Montero offers original improvisations inspired by Clara’s music.

[Montero’s] playing is free-spirited, fire-centred and uninhibitedly expressive, with a sense of rhetoric and flexibility that suggests the Romantic era itself: you can almost see the young Clara mesmerising audiences across Europe…As for the symphonies, Shelley wields a taut baton, presenting textures that are slender yet not too wispy, filled with spirited rhythms but sensibility measured tempos.

Clara, as a composer, could never command the same recognition as the men in her life, but Darlings of the Muses sets out to give her music its deserved place...we hear soloist Gabriela Montero espouse the Lisztian bravura and Chopinesque suppleness of Clara’s Piano Concerto in A minor with Alexander Shelley and Canada’s National Arts Centre Orchestra, cushioned by well-crafted solo improvisations.