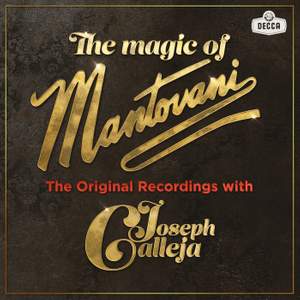 Joseph Calleja - The Magic of Mantovani

Rodgers, R: Edelweiss (from The Sound of Music)

Bernstein: Maria (from West Side Story)

Bernstein: Somewhere (from West Side Story)

Bernstein: I Feel Pretty (from West Side Story)

Kaempfert: Strangers in the night

Kaempfert: Strangers in the night

Interview,  Joseph Calleja and Dominic Fyfe on The Magic of Mantovani

The Maltese tenor and record-producer discuss bringing Mantovani's music back to life on a new album which sees Calleja 'duetting' with vintage recordings from the Universal Music archives.

Decca presents the release of a brand new album in which Mantovani’s original orchestral 1950s and ‘60s recordings are remastered and set with brand new vocals – for the very first time – from one of today’s most acclaimed and sought-after singers, the award-winning Maltese tenor, JOSEPH CALLEJA.

40 years, this March, since Mantovani’s untimely death in 1980, his trademark "cascading" strings sound, which led to the star being the first artist ever recording artist to sell over 1 million stereo albums.