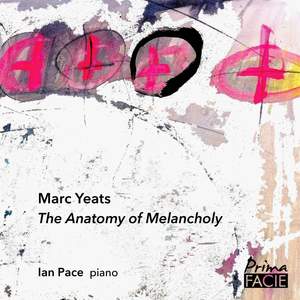 Marc Yeats: The Anatomy of Melancholia

Yeats: The Anatomy of Melancholy

Yeats: The Viciousness of Circles

Prima Facie is pleased to announce the release of 'The Anatomy of Melancholia'; piano music by Marc Yeats featuring virtuoso pianist Ian Pace. In the words of the composer: Ian Pace is a phenomenal pianist, a man whose musicality and intellect I have admired for many years. I have heard him fearlessly play some of the most challenging music of our time with huge flair, passion, insight and musicality. I've been writing piano music since 1997 and over the years have built up a substantial catalogue of works, many of the pieces highly ambitious and virtuosic beyond normal pianistic expectations. I have dedicated many of these pieces to prominent international pianists, but across the years due to a number of factors, mainly around the music's enormous challenges only a tiny handful of the pieces (often the least frightening and shortest of them) have been performed live, and until now, none were recorded. In this amazing collaboration with Ian, for the first time, I have found a pianist who not only enjoys and can meet these musical challenges but is a pianist who actually wants to perform this work because of the very nature of the writing itself. This album is the first recorded collection of my piano works, ranging from 1997 to the present day, and includes pieces deemed by many pianists to be too challenging to play. Marc Yeats is one of the UK's leading contemporary composers with his works having been performed by the BBC Philharmonic Orchestra, Hall Orchestra, broadcast on BBC Radio 3 and stations across Europe, Asia and Australasia. Described by Peter Maxwell Davies as "breathtakingly original", and Professor Stephen Davismoon as "one of the most prolific and influential composers and creative artists of his generation in the UK", Marc's music explores transduction, complex sonic, perceptual, asynchronous and polytemporal relationships, sonic flux, contextual, harmonic and temporal ambiguities, polarised intensities and a visceral joy of sound. Marc's music has received performances around the world including The Edinburgh String Quartet (UK), the Chamber Group of Scotland (UK), Psappha (UK), Geert Callaert (BE), the London Sinfonietta (UK), the Endymion Ensemble (UK), Paragon Ensemble (UK), the Scottish Chamber Orchestra (UK), 175 East (N.Z.), Sarah Watts, SCAW (UK), Sarah Nicolls, Federico Mondelci, Contempo Ensemble (Italy), Rarescale (UK), Carla Rees (UK), The Scottish Clarinet Quartet (UK), Symposia (UK), the New York Miniaturists Ensemble (US), Trio IAMA (Greece), Dirk Amrein (Germany) Expatrio (UK), Chroma (UK), Kokoro (UK), Consortium5 (UK), Gleb Kanasevich (US) Ensemble Amorpha (UK), Meridian Brass (UK), Syzygy Ensemble (AU) Chamber Cartel (US) Carlton Vickers (US), XelmYa (DE), Ian Pace (UK), Ensemble Suono Giallo (IT) the BBC Philharmonic Orchestra (UK), the Hall Orchestra and Chorus (UK) conducted by Sir Mark Elder, Tokyo City Philharmonic (JP) and Gewandhaus Radio Orchestra (DE), for example. Marc's relationship with the BBC is both strong and enduring, starting with a BBC Scotland performance by the Edinburgh String Quartet more than 20 years ago. His first orchestral work I See Blue conducted by Martin Brabbins, received much acclaim when first performed around the same time. This led to specific BBC commissions, including a piano concerto to open Piano 2000 in Manchester, with Kathryn Stott as soloist and a solo harpsichord piece 'Rhema', performed by Mahan Esfahani and broadcast in 2010 by BBC Radio 3 from the Clothworkers' Centenary Concert Hall in Leeds.