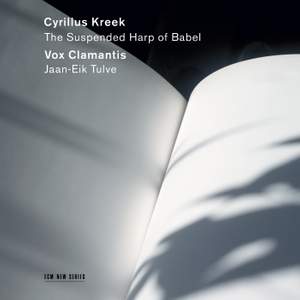 Kreek: The sun shall not smite thee

Cyrillus Kreek, Traditional: Whilst Great Is Our Poverty

Cyrillus Kreek, Traditional: From Heaven Above to Earth I Come

Praise the Name of the Lord

Kreek: By the rivers of Babylon

Kreek's pieces, incorporating graceful settings of psalms and folk hymns, are juxtaposed here with instrumental fantasias and interludes created for this recording by Marco Ambrosini. Under the direction of Jan-Eik Tulve, the Vox Clamantis choir whose previous ECM recordings have addressed works of Arvo Prt, Erkki-Sven Tr and Helena Tulve as well as Gregorian chant prove to be ideal interpreters of a music poised between old and new.

The Suspended Harp of Babel was recorded in Tallinn's Transfiguration Church in August 2018.

A caressing velvety choral reassurance underpins Jaan-Eile Tulve’s tender direction of Psalm 121…Nothing is forced. The singing breathes with a collective, gentle inevitability…The final impression is abiding solace for these distracted times.

Their clarity, their precision, their sheer musicianship make them easily one of the best vocal ensembles currently active anywhere in the world...Two of the most impressive works are Bless the Lord, my soul and By the rivers of Babylon, both of which are absolutely ideal vehicles for Vox Clamantis, whose precise placing of chords, assisted by impeccable tuning, means that every harmonic detail is as clear as a bell. Highly recommended.

His music is tonal, sensuous yet pure, direct but almost introspective...His setting of Psalm 104, Bless the Lord, my soul, opens with deep basses underpinning all, growing in radiance then retreating into haunting stillness...It’s music of another place and time, beautifully done.