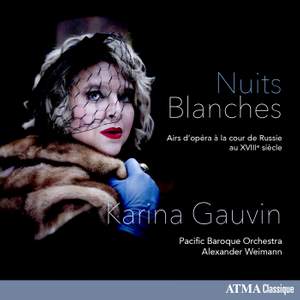 Nuits blanches: Opera Arias at the Russian Court of the 18th Century

Gauvin’s Gluck is particularly classy...Of the vocal music by the Russians, Berezovsky’s is the more interesting, with two well-crafted arias from Demofoonte...The Pacific Baroque Orchestra under... — Gramophone Magazine, August 2020 More…

Bortnyansky: In qual mar (from Alcide)

Nuits blanches (White Nights) is a much anticipated new recording by soprano Karina Gauvin, who stylishly animates the opera heroines of the 18th century Russian court. Musical life during the reign of Tsar Peter the Great was a rich blend of diverse styles and influences originating from all over Europe. Karina is supported by the Pacific Baroque Orchestra.

Tsar Peter the Great was known for his love of music, a tradition that was carried on by his successors, the Empresses Anne, Elizabeth, and Catherine II, who cultivated cosmopolitan tastes for all kinds of music, including opera.

Karina Gauvin sings arias from rarely heard operas by Russian composers such as Dmitri Stepanovich Bortniansky (Alcide) and Maxim Sozontovich Berezovsky (Demofoonte), and German composer Christoph Willibald Gluck (Armide). Karina Gauvin’s recordings include her solo CDs on the ATMA Classique label as well as contributions to more than 50 other discs, and have won numerous prizes including a Chamber Music America Award for F te Galante with pianist Marc-Andr Hamelin, a JUNO and a F lix for Prima donna, and several Opus prizes and three Grammy nominations.

Gauvin’s Gluck is particularly classy...Of the vocal music by the Russians, Berezovsky’s is the more interesting, with two well-crafted arias from Demofoonte...The Pacific Baroque Orchestra under Alexander Weimann are sensitive partners, the flutes especially buttery.

The Canadian soprano is in ravishing voice for this fascinating programme of music from the Russian imperial court, on which homegrown but Italian-trained composers Dmitry Bortnyansky and Maksym Berezovsky hold their own against St Petersburg favourite Gluck, whose Armide supplies the meat of the programme. The Pacific Baroque players find plenty of spirit and colour in orchestral interludes by Domenico Dall’Oglio and Yevstigney Fomin.