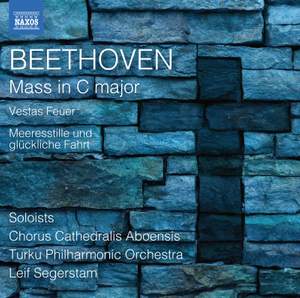 The custom of marking the name-day of Princess Esterházy with a newly composed Mass began in the 1790s and for many years was carried out by Joseph Haydn. In 1807 Beethoven was commissioned and responded with his Mass in C major. Coolly received at court, it is a celebratory work of large-scale brilliance. The cantata Meeresstille und glückliche Fahrt is set to Goethe’s poems and contrasts calm with exuberance. In 1803 Beethoven set two numbers from Vestas Feuer, written by Emanuel Schikaneder, the librettist of Mozart’s Die Zauberflöte.